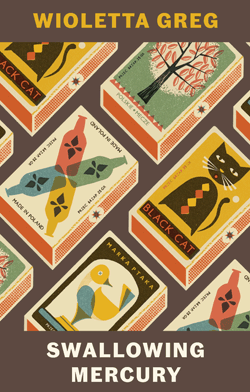 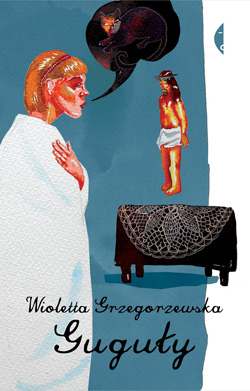 Born in 1974, Greg was brought up in the small village of Rzeniszów, which is in the district of Koziegłowy in southern Poland. She has lived in England since 2006. Greg writes in Polish and her first medium is poetry, which shines through in her prose. Her poetry collection, Finite Formulae & Theories of Chance, was shortlisted for the 2015 Griffin Poetry Prize.

Greg’s stories moves chronologically through the life of the narrator Wiola, from early childhood to her teenage years. It is sensitively written, observing her world through the eyes of a child growing up in a rather poor rural Poland of the 1980’s. Her experiences are raw and often difficult; she remembers scents and many details evoking an almost tangible impression of her surroundings.

Eliza Marciniak, whose translation reads so well, is a London-based editor and translator, who originally emigrated from Poland to Canada at the age of 13. She has been mentored by Antonia Lloyd-Jones, as part of the British Centre for Literary Translation Mentoring Scheme.

Read the review of Swallowing Mercury in The Guardian: https://www.theguardian.com/books/2017/jan/06/swallowing-mercury-by-wioletta-greg-review

Zenon – Loved it! Stories make sense to him as individual pieces and as a chronological or rather diachronically development of the novel. Zenon drew attention to the ‘Unripe’ story when the images of her father’s difficult childhood come to her when she holds his hand just before the wake.
He liked the picture of the picture of the 80’s through young girl’s eyes living in the Polish country side, where only peripheral but very poignant signed got though from those very turbulent years. Zenon thought that it was beautifully written and fascinating.

Krystyna – agreed with Zenon. She pointed how in the 99% autobiographical book the author ad-justs her name (Loletka, Wiola etc) to reflect different stages of her childhood and how they reflect her relationships and emotions. Stories according to Krystyna are full of energy, well reflect rural life in Poland. She was surprised how similar life in Poland was in 1980’s to her parents life in pre-war borderlands in 1920’s, with almost the only difference that Wiola went to high school and they had electricity. Krystyna felt that it would make a very good high school reading in Scotland.

Ken – He liked the image of 1980’s in Poland through child’s eyes. He drew our attention the story called Strawberries, as an interesting evocation of 1939 – prewar. The novella gives a good picture of catholic Poland intertwined with the communist Poland. The smilingly benign world contains it all: including sexual abuse and community on medical situation of the countryside. It reminded him of Herta Muller writing about Rumania. All in all it offers a pictures of very reach upbringing. Stories often have quite an old fashion endings, bringing it into conclusion, which is quite satisfying, rather than open-ended, quite in fashion these days.

Robert – Wasn’t sure about the book, not quite his thing. However, as chemist by training, he brought to our attention an interesting story about mercury and Lond Bradford. Mad hatter deseed was also mentioned, as milliners used mercury in their work and the vapors made them slightly of kilter.

Jenny – she loved it and identified with it, but at first she questioned is trivial subjects, like superfi-cial religiosity, menstruation etc. According to Jenny it is the accumulative effect of the chapters that makes an impact on the reader. It reminded her of Maria Janion’sbook Do Europy tak ale razed z naszymi umarłymi (To Europe Yes, but Together with our Dead-once) 2000, and Anna Jako, Mała Zagłada ( The Small Hallocaust), 2015, written by a survivor of German massacre of the village of Ruszów. Poland is a haunted country which still has a lot of digging of the past to do and to come to terms with. Jenny thought that it is beautifully translated. She also stressed the im-portance of the family and community in the novella, which compensate for the poverty.

Ewa – She liked the book, and read it twice in Polish, even though it was heavy going at times as there was lots of unfamiliar words in Polish and in English. attention problematic translation of in Polish version p. 114 ‘ – “Masz szczęscie, chłopie, że mama zapomniała spuścić na noc Miśka z łańcucha, boby ci zrobił z tyłka jesień średniowiecza”, which in English version is translated as “You are lucky, you know, that Mum forgot to let Bear off the chain last night, or he would’ve really fucked you up.” She felt that the reference to a very well known book “The Autumn of the Middle Ages” by Johan Huizinga should have been retained, especially since it has been used in Pulp Fic-tion. She also pointed to the very warm relationship with Violetta’s father, Rysio, who was very tal-ented and had a lot of potential, which he didn’t fully realized and died at the age of 50.

We also noticed that the chapter “Dzieła Wszystkie” (Collected Works) hasn’t been translated.

Basia – Enjoyed it very much. She commented on religious rituals and superstition like saying red ribbon around child’s angle, covering with red dude, without its proper cover, as a cure to bring the hight temperature down, primitive hygienic condition, outside toilet, bucket in the corridor, and pip-ping into intimate life of the local seamstress.

Magda – stress that it is a Bildungsroman type of a book, or coming-of-age story of a girl, growing up in a very particular time and place. Her not easy childhood was full of hunger, but at the same time love and care, fillings and affection. She is brought up in a multigenerational house, where her mother makes carrot juice for her in most primitive conditions, her father cares so much that he cries. She recalls going on holidays to a similar country side by the river Bug where there was a strong sense of community, enjoyment of the forest, local simple cooking and sliding down the haystacks.

Grażyna – also loved it. She pointed to a sensuous quality of the book, with all its smells, textures and sounds. She felt that the translator should have an equal presence on the book jacket. She felt that it has read as a collection of individual short stories on one hand and on the other as chrono-logical chapters within a novel. She felt that it was very poetic, and that it would be interesting to read some of her poetry. Grażyna also wondered if the distance of living in England since 2006 made this book possible, that is looking from a different perspective. Reading it second time round in Polish helped her to appreciate the richness and great quality of the book.

Tom – had also read it twice in English, and the second time was very enjoyable and helped him to appreciated the book better. It is aa universal story with child like view of the world, set in local re-ality. Father figure was strongest in the book in his opinion. He also appreciated how the growing up process is masterly conveyed through the chapters, including sexual awareness – very honest account. Chapters ending in some sort of moral resolution or pointing to it. Perhaps difficult reading for a Scottish High School, put possible selected stories with some guidance.

Robin – enjoyed it. Very evocative of the 80’s in a poor countryside with all its smells, dirt and gentle historic context of Martial Law. He pointed the story of the Pope’s visit and the fact that Pope’s teaching hadn’t done much for women’s rights.

Mark – believes that it is attractive to the English reader. It shows transition. Not surprising she has left Poland for England.

Stuart – enjoyed it very much. The book took him right back to the Polish realities and his experiences when he lived in Poland.