I highly recommend Wojtek Smarzowski’s new and controversial film Wesele (Wedding), strong and poetic at the same time, opened in October in Polish cinemas. We saw it in Kino Atlantic in Warsaw. It is a double story, one happening now in a small village; the daughter of a pig farmer and entrepreneur is getting married. A second story, seen through the eyes of the grandfather, takes as back to the World War II and just before, when he was in love with a young jewish girl from the same village. It is inspired by a gruesome, but how important, recollection of Jedwabne tragedy. It is Smarzowski’s story about Polish demons past and present, xenophobia, parochialism, fear of the other, questionable influence of the church and nationalism. Not to be missed and hope it will come to the UK.

https://www.youtube.com/watch?v=_oygxbPM5Hc Beautifully read, with a real understanding of the philosophical meaning of this poem. Here is my translation.

A soul on the beach

– Who tied us together?

that we don’t exist?

The body says: – I am tanning my knees.

It has tanned its knees.

Share:
Krzysztof Varga wrote in Gazeta Wyborcza 5.10.2020
“I have read The Doll by Bolesław Prus for the fourth time, and I am not writing this to brag, but to share my feelings of shame, as this novel should be read, not less than every three years. As far as most current and hot news, we are celebrating 130 years of the first book edition of The Doll. It is an anniversary which can’t be ignored; we should celebrate it the same way as the anniversaries of the national uprisings, and perhaps with even more fanfare, as this super-novel was one of the last flights of the Polish mind, bewildering glimmer of sobriety in a drunken national dance which is happening here since centuries.” (The whole article – in Polish – can be accessed here.)
Share:

Tomasz Miłkowski (Trybuna 03.01.2020) refers to Olga Tokarczuk’s sketch The Pearl and The Doll (Wydawnictwo Literackie 2011), and quotes Tokarczuk: “Time treats literature differently then people. Time had no effect on The Doll. Literature can operate in its magical duality, but only if it is a masterpice. It tells us, on one hand, in great detail about the historic and defined time at the end of the XIX century, and the stories the living people. It tells us <how it was>, or rather <how it could have been>. The novel tells us about an inner experience, but not about the recorded facts.  On the other hand it tells us <how it is> referring to the basic psychological laws, which age slower then the external world. Actually, everything what is essential in The Doll could be happening now>.”

Miłkowski writes: ‘She is makes a surprising comparison between Wokulski’s situation and that of the hero of Hymn of the Pearl by Czesław Miłosz, a free reworking of an apocryphal  story of Thomas. The main comparing event of the Hymn is the awakening of the Prince, who inspired by the letter from his parents, returns to his earlier goal (of finding of the Pearl). The choice of this comparison, between the path of Wokulski and that of the Hymn, Tokarczuk explains by the presence of “the metaphors of dreaming and waking up, path and goal, descending and lifting up – the same signs which moved me so much in Lalka.” 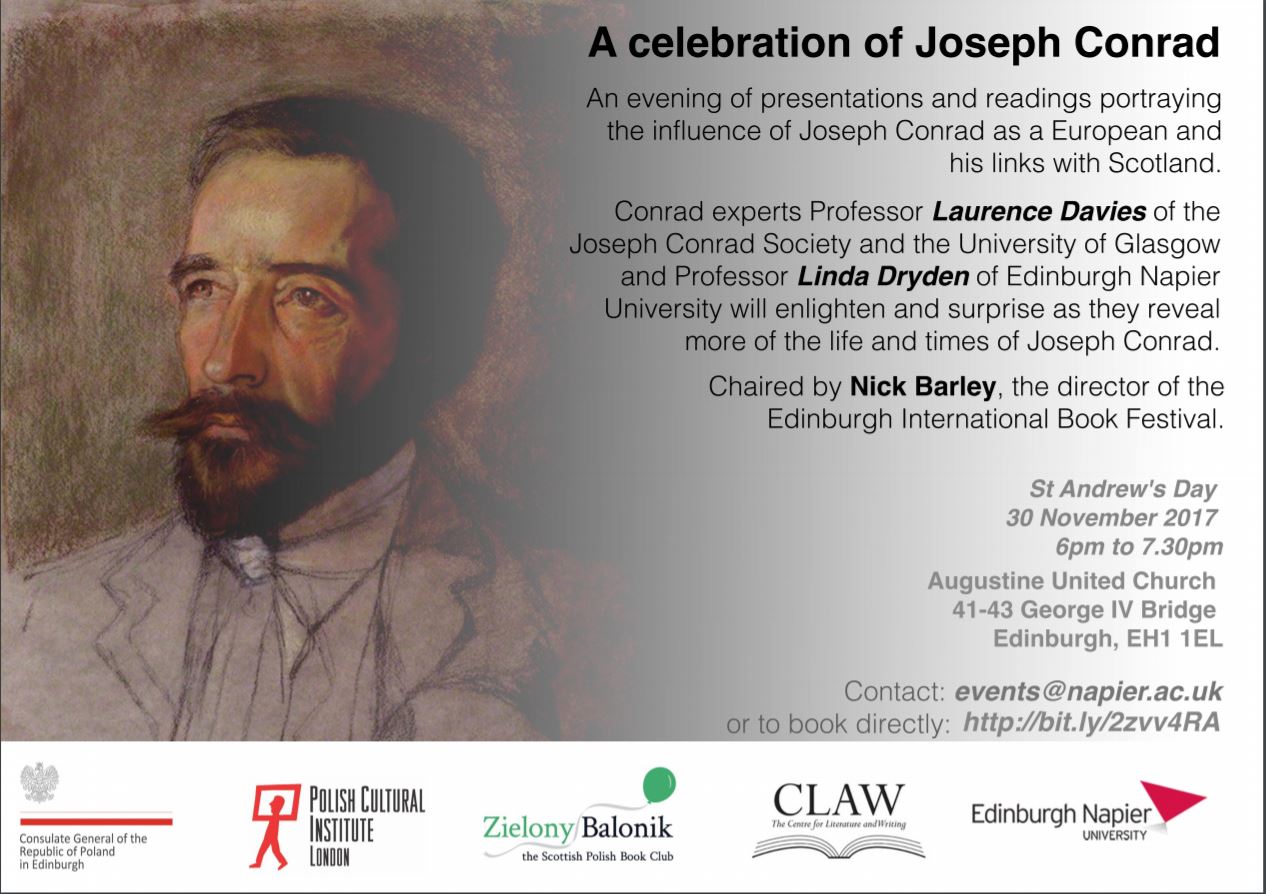 An evening of presentations and readings portraying the influence of Joseph Conrad as a European and his links with Scotland. Conrad experts Professor Laurence Davis of the Joseph Conrad Society and the University of Glasgow, and Professor Linda Dryden of Edinburgh Napier University will enlighten and surprise as thy reveal more of the life and times of Joseph Conrad.

During my last visit to Warsaw I needed a haircut. My usual hairdresser was on holidays and I started looking at other salons. Walking along Wilcza Street, I noticed a narrow shop with lots of wood and warm lighting, with a small sign – fryzjer, but no hairdressing activity in site. After some hesitation I went in to explore; yes, It was a hairdresser and a nice young lady at an elegant reception desk invited me for a haircut with Luiza at 7:00pm.

I arrived earlier, and the same receptionist took me through a couple of rooms to a comfortable sofa. I observed Luiza zen-like hair cutting: very, very slowly, with great concentration and attention to almost a single hair. She smiled at me from time to time, as she sensed being observed. A large mug of green tea and a couple of articles later, she sat me in front of a full length mirror to discuss my haircut. On a little transparent table by the mirror, I noticed a small laminated pice of paper with a short text, placed next to a vas with pink carnations. To my astonishment it was a poem ‘Na zewnątrz noc’ (Outside its night) by Tadeusz Borowski, one of my recently re-discovered authors. I was astonished to find poetry and especially Borowski’s poem at the hairdresser! I read the poem a couple of time and realised that it was about the War and his love Maria, whom he followed to Auschwitz. Borowski’s selection of short stories has been translated into English and published by Pengwin Classics This Way to the Gas Ladies and Gentlemen. END_OF_DOCUMENT_TOKEN_TO_BE_REPLACED

The Last Family DVD was sitting on my bookshelf since my last visit to Warsaw. I have never liked Beksinski’s paintings, but was keen to see the film about him and his family; he was a well-known painter with quite a macabre style.

Directed in 2016 by Jan P. Matuszyński, it is a portrayal of a successful artist’s life in Warsaw before all the changes. Tomek moved from Sanok, a small town, into a high rise block on the same housing estate as his parents, who lived there with both grandmothers. He is quite depressive and disruptive individual. Fluent in English, he is passionate about the new British music and develops his own late night radio programme, to which my brother listened in the 1970’s. His suicidal tendencies are a constant worry to his family.

END_OF_DOCUMENT_TOKEN_TO_BE_REPLACED

On the 13 August Philip Springer – the author, and Sean Gasper Bye – the translator of History of a Disappearance, appeared at EIBF. The translator was in the audience and signed the books, along with the author, after the talk. It was interesting to hear from Springer about his way of working and how he got inspired to write this story. Since it was published in Poland in 2011 he had written 6 other books! Springer is interested in interpretations of events, how myths  and different versions grow around difficult times and happenings. According to Springer, these mysteries and sometimes lays, are more reveling about the social history than facts alone.

Bye’s speciality is translation of non-fiction. In addition to Polish he also translates from Russian and French. He is American of Polish parentage on his mother side, and lives in New York. Bye read this book shortly after it was published and loved it so much that he kept mentioning it to various publishers and eventually, on a publishers trip to Krakow, it was taken up by Restless Books from Brooklin NY, which seeks  ‘extraordinary international literature that feeds our restlessness: our curiosity about the world, passion for other cultures and languages, and eagerness to explore beyond the confines of the familiar.’

The power of literature seem to be putting Miedzianka back on the map. A new brewery has been opened up by a young couple from Wrocław and a cafe / bookshop and art gallery is built by a hipster from Warsaw. So in addition to reading Springer’s book, Miedzianka or Kupferberg is a must destination on our next visit to Silesia!

This Sunday 13 August 6:30pm Filip Springer is going to talk about his book at the Edinburgh International Book Festival. I am going to be there and it is our next reading. I have started reading it Polish and just been to Karpacz on holidays, so it feels very real.