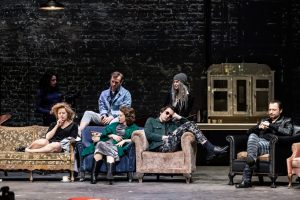 In Teatr Powszechny in Warsaw I saw a new play directed by Krystian Lupa, one of my favourite theatre directors. with much input from the actors, including some improvisation. This collaboration between Teatr Powszechny in Łódz and in Warsaw, is based on John Lennon’s and Yoko Ono’s famous song Imagine. A group of New Age friends, inspired by such characters as Andy Warhol, Sylvia Plath, Thomas Bernhard and others, are invited by their old leader to a reunion. It takes them back to the 1960’s and, at the same time, asking important questions about today, including the war, climate emergency, our fragility and the future the humanity in general. No subtitles, but I recommend it, if you are in Warsaw; however be prepared for six hours. https://www.youtube.com/watch?v=2Ku1ahR53TI