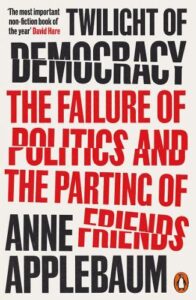 We recently read Anne Applebaum’s Iron Curtain: The Crushing of Eastern Europe, 1944-1956 (2012). A couple of our members have read her most recent book, Twilight of Democracy, and offer their thoughts on it below.

The starting point is Hogmanay 1999. Most will recall where they were and what were their thoughts as they stepped into the 21st century. A party held by Anne Applebaum and her husband, Radek Sikorski, brought together family, friends and colleagues from Poland, the UK and USA with shared liberal democratic values. But their cohesion has since been splintered by the forces of authoritarianism challenging democratic norms and destabilising civil society. The book is a personal commentary on the changes as witnessed and experienced by Anne Applebaum since the turn of the Millennium.

The drivers of change include the demagogues and the levers they use to build their illiberal, anticompetitive and anti-meritocratic power bases on the foundations of resentment, revenge and envy fuelled by the “Medium Lie” from which conspiracy theories are spawned to win the loyalty of the disaffected. Anne Applebaum illustrates her observations in detailing the policies and practices of the Law and Justice Party in Poland led by Jaroslaw Kaczyński and the search for conspiracy to explain the 2010 Smolensk air crash conspiracy by the former, Minister of National Defence, Antoni Macierewicz, alongside similar trends in Hungary over recent years.

Antoni Macierewicz visited the Wojtek Memorial in Princes Street Gardens in Edinburgh in January 2016 in his ministerial role together with Philip Hammond, the then UK Foreign Secretary and Witold Waszczykowski, Poland’s Foreign Minister at the time. It feels like a long time ago.

Nostalgia has been adopted in support of the new authoritarianism. Anne Applebaum draws on The Future of Nostalgia by Svetlana Boym, who compares reflective nostalgia and restorative nostalgia. The latter is not satisfied with contemplating or learning from the past but is intent on rebuilding a selected version of the past to promote discontent, the language of conflict and the invocation of scapegoats; for example, Brexit.

In her chapter ‘Cascades of Freedom’ she quotes Olga Tokarczuk on the impact of the speed of modern media to spread narrative, irrespective of truth; “instead of hearing the harmony of the world, we have heard a cacophony of sounds, an unbearable static in which we try in despair to pick up some quieter melody, even the weakest link”. And, in her chapter ‘Prairie Fire’, Steve Bannon in the United States in 2010 adapting Bob Dylan for his own ends; “it does not take a weatherman to see which way the wind blows, and the winds blow off the high plains of this country, through the prairie and lighting a fire that will burn all the way to Washington in November”.

From the infamous Dreyfus case in France in 1894, through the 20th century and now in the 21st century, the use of the “lie” or “fake news” is compounded by the fabrication of culture wars to cultivate the advance of extreme right and extreme left thoughts and action. Anne Applebaum bravely sounds the alarm bells and calls out those who distort freedoms in whatever guise. It is no surprise that in typical Anne Applebaum style that her notes for her book are detailed and comprehensive.

Anne Applebaum’s recent Twilight of Democracy differs from her extensive historical studies of the Soviet Gulags, the Ukrainian Famine and the imposition of Soviet power in post-war eastern Europe – it is contemporary and more personal. This study of how populist movements have entered mainstream politics in America, the UK and Europe (with particular focus on Poland and Hungary) explores how the ideological ‘Big Lies’ of Fascism and Communism have been replaced by the ‘medium lies’ of nationalism and xenophobia. Using her own personal experiences as well as extensive research, Applebaum explores how manipulation of the media, appropriation and distortion of history, attacks on independent judiciary and on basic democratic rights continue to theaten the fragile nature of democracy in what is termed the ‘free’ world. It’s a crisply written and cogently argued analysis that is thought-provoking and disturbing – all the more so because it’s horribly familiar.

The book begins with a party at the Applebaum home in Poland 20 years ago, with a gathering of eminent guests and the promise of imminent European integration and the establishment of a democratic society; it ends with a party in the same location in 2019, with mainly different guests and the realities of cronyism and corruption, media manipulation, xenophobia and authoritarianism. Applebaum explores how we got where we did – and it’s a journey of disappointments both personal and political. The book’s UK subtitle – The Failure of Politics and the Parting of Friends – sums up the story succinctly. Along the way she deals with Trump, Brexit (a particularly damning analysis of her former journalistic colleague Boris Johnson), the rise and rule of the Law and Justice party in Poland , the rise of Orbán and other European populist politicians. It’s a wide-ranging and perceptive study, particularly of nationalism (distinguishing between ‘reflective’ and ‘restorative’ nostalgia) and the manipulation of the media (including the use of social media). The political and social analysis is all the more telling for Applebaum’s personal knowledge of many of the protagonists and her direct involvement in many of the issues  – though it’s hardly a spoiler to say that her friendships and relationships change significantly over the 20 years that she covers in the book. So what changed and why? And who changed? Why do Applebaum’s former friends and acquaintances, apparently committed to democratic principles, behave as they do?

The book is a provocative and bracing read. Though it was published before ‘Stop the Steal’ and the Capitol Hill riot, the continued incursions into basic freedoms in Poland and Hungary, continued evasions of Johnson and his government (cronyism, the NI protocol and Brexit issues, treatment of migrants, funding of public services), none of these events are unexpected in the overall trajectory of the book. Applebaum offers a few strands of hope for the future though it remains to be seen whether these strands make enough rope to get us out of this particular hole. What’s definite is that submission, acceptance, apathy only makes it deeper. This short, punchy and incisive analysis shows that democratic freedoms are fragile and cannot be taken for granted. As such, this readable book is timely, urgent and necessary.