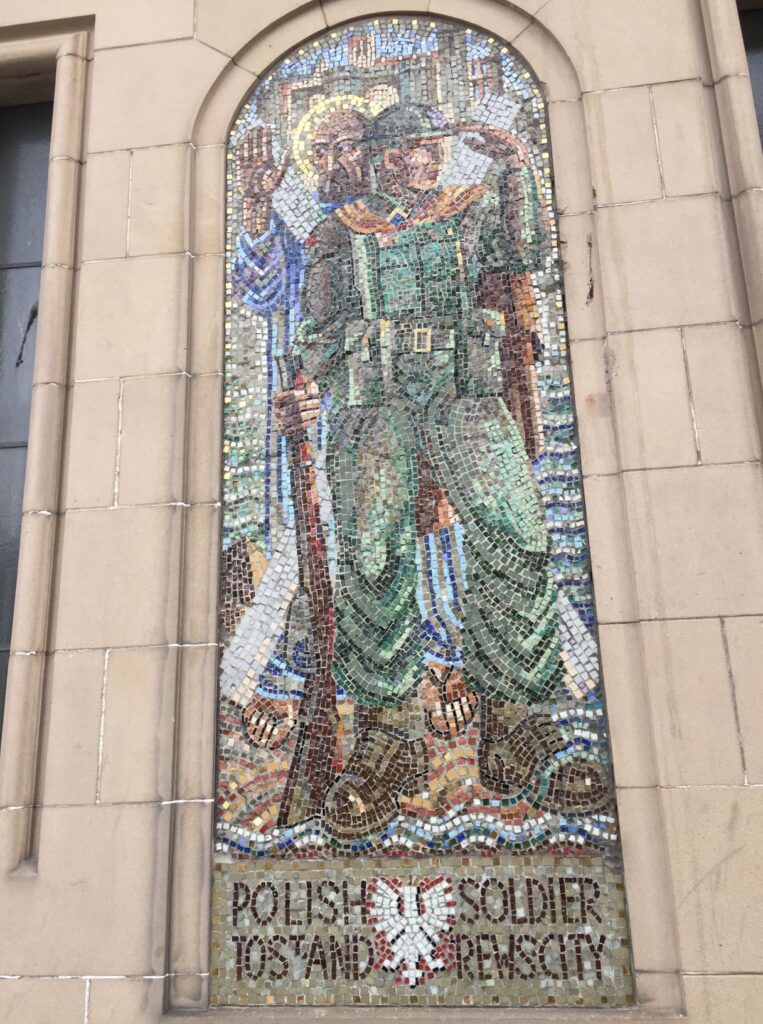 One of our members, Jenny Robertson, came across this Polish mosaic in St Andrews.

She writes, “I noticed in during my wandering through the town when I was tour guiding. I looked up the internet. Two sites, one being the chaplaincy of St. Andrews University, say it was done by three Polish soldiers in 1941. And that’s all I could discover. It’s a beautiful tribute and badly needs restoration.”

We also discovered a picture of the mosaic on Flickr, which includes this commentary.

“… during the Second World War, when St Andrews and the surrounding area played hosts to the Polish Army in exile. In 1940, Polish units, evacuated from France, took over the coastal defences in parts of eastern Scotland. Poles became closely associated with the town and, at the end of the war, many settled and remained in the St Andrews area. A mosaic panel in the wall of the Town Hall expresses the gratitude of Polish soldiers for the hospitality received from the people of St Andrews. A bust of General Wladyslaw Sikorski, the Prime Minister of the Government-in-Exile and Commander-in-Chief of the Polish forces, whose headquarters were in the nearby city of Perth, stands in a St Andrews park.”

Earlier this month The Guardian’s Great British Art Tour series featured another image of a Polish soldier in Fife, made more recently.

Jane Freel, collections curator, ONFife Museums and Galleries, introduced the painting ‘Memories of a Polish Paratrooper’, which evokes the life and memories of an imagined soldier. It was created in 2006 by Marie Louise Wrightson, a graduate of Duncan of Jordanstone College of Art & Design, for Fife Contemporary’s Past Present project.