The Polish Ex-Combatants’ Club at 11 Drummond Place in Edinburgh is to be renovated; works have started and the building will reopen as a revitalised cultural centre in 2020. The building was first purchased by Polish soldiers in 1948 and after 70 years the collections of books, pictures, documents, photographs, etc provide a snapshot over that time. The first sorting has commenced and discoveries being made of publications which excite interest. During 2019 the selected material will be assessed, catalogued and conserved before being returned to the new centre or dispersed to relevant libraries. Jenny and Stuart Robertson, Tom Bacciarelli and I made a start on November 26 but we have three rooms of books to sort through so it will take some time, especially when a special find starts a conversation and we then have to remember to return to our task! 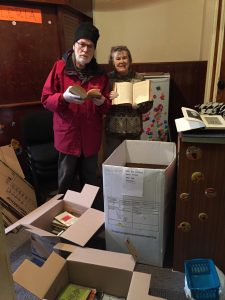 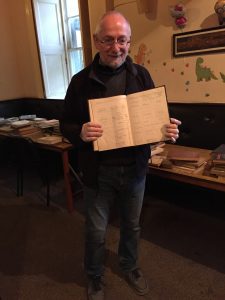 Members of Zielony Balonik were delighted to meet with Żanna Słoniowska, the author of The House with the Stained-Glass Window at the Lighthouse Bookshop in Edinburgh on May 26th at an event hosted by Kasia Kokowska of Word Polishers and supported by the Polish Consul General in Edinburgh.

Żanna explained that her first novel was the culmination of a long process of living the first part of her life and thinking of its meanings in the embrace of the character of  her home city, Lviv, as it is now known and located in Western Ukraine. The human characters in her story  explore how four generations of women in the same family, living in one house, reflect the multiple identities, inherited or thrust upon them, as a result of geopolitical upheavals including war itself, imposed by external forces or generated from within through cultural conflict.

Her book was written in Polish and expertly translated in fastidious detail by Antonia Lloyd-Jones. Żanna’s  multi-language skills (Polish, Ukrainian, Russian and English) demonstrate her own internationalism and her desires for cross cultural links to be expressed in freedom of thought and movement. Żanna’s book adds to the revelation of the role that the city of Lviv has played in the history of the borderlands of eastern Europe, and how for too long it became almost invisible in the aftermath of the Second World War.

The complexity of Joseph Conrad was revealed by experts Laurence Davies and Linda Dryden in two presentations highlighting his connections with people and places in Scotland and his transnationalism engendered by his personal family history of displacement and the twenty years of traversing the oceans. It was fascinating to see images of the young Konradek on his horse in the territory of the Russian Empire in 1865 and then the elderly Joseph Conrad relaxing in his garden in Canterbury, Kent with a cousin in 1924. In between his life resulted in writings which have been recognized not only for the quality of his use of the English language but also for his commentary on issues at the time which resonate today, such as racism and slavery, inequality and globalization. These multiple aspects were drawn together by Nick Barley in a Q and A session. 160 years after his birth there is no doubt that the works of Joseph Conrad are reaching out to a new generation and to a wider audience.

On the night we welcomed 65 people to this free event at Augustine United Church. Starting at 6pm the main event concluded at 7.30pm but we then welcomed 20 guests for a reception, which closed at 8.45pm. We distributed leaflets advertising the new publication Conradology and we are now looking forward to Nick Barley successfully inviting Maya Jasanoff to the Edinburgh International Book Festival in 2018 to promote her book “ The Dawn Watch”.