A story in bronze and granite 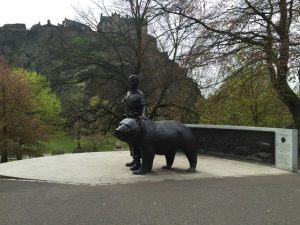 The world famous Princes Street Gardens in Edinburgh is now home to a memorial in honour of the courage of all Polish soldiers and Wojtek, the Polish ‘Soldier Bear,” during and after the second world war. It is presented in a magnificent setting opposite Edinburgh Castle.

The story behind the memorial touches all senses as it is borne out of global conflict and reconciliation; human strength and frailty; friendship and loyalty between man and animal; and an indomitable spirit to endure for future freedoms. In 1942 a new Polish Army was being formed, recruited from men who had been deported from Poland by the Soviet Union to camps in the gulag. The first transportation across the Caspian Sea to join the British Army in Persia took place in March 1942. Soon afterwards an orphaned bear cub was adopted as a mascot and named Wojtek, which translates as “happy little warrior”. He accompanied the soldiers throughout their military duties in the Middle East; was registered as a soldier so that he could board ship in Egypt to sail across the Mediterranean to participate in the Italian Campaign; of his own volition carried munitions at the Battle of Monte Cassino; travelled to Scotland for resettlement after the war; lived at the Winfield Camp in Berwickshire; and then was cared for in Edinburgh Zoo where he died in 1963.

There are few veterans remaining but their legacy has been reawakened and their fortitude and, in many cases, silence on their experiences has been borne in part by future generations. The story’s revival completes the historic record and allows new generations to celebrate that courage; reflect on the lessons to be learned; heal the hurt of displacement, grievance and shame; and allow new generations to participate in a story, which crosses the boundaries of time and nations.

The composition comprises a bronze statue and pictorial set on a granite platform. The sculptor is Alan Beattie Herriot and the caster Powderhall Bronze in Edinburgh. Its setting has been designed by Raymond Muszynski of Morris & Steedman Associates. The granite was sourced and prepared in Poland so that the soldier and the bear are standing on a piece of Polish homeland.

The memorial is located on the terrace walk at the west end of the gardens on the south side of the main terrace at the corner of a pathway leading down into the main area of the gardens. The figures are standing, waiting to engage with the passers by. This is an important part of the story for this most sociable bear and his keeper. Wide stone steps provide a welcome seating point from which to view the gardens. The 4m low relief pictorial animates the story and provides a sensitive new feature in the gardens. The planting of a beech hedge behind the pictorial reflects the flora of the country lanes in Berwickshire. Beech is a symbol of prosperity and friendship

The artistry of the memorial can be appreciated from Princes Street looking down into the gardens; at the terrace level as a walking encounter with the bear and his keeper; and looking up from the lower path to see the statue in a natural elevation. Furthermore, the aspect to the castle is reminiscent of that which faced the soldiers at the final Battle of Monte Cassino in May 1944 as they fought their way up the slopes assisted by Wojtek. Its position in this site therefore offers a multi-dimensional appreciation. At its unveiling on November 7th 2015 the Polish flag was flown at Edinburgh Castle and the memorial gifted to the City of Edinburgh.

The story belongs to everyone and has been interpreted in this memorial as well as in poetry, literature, theatre, film and the Great Tapestry of Scotland. A selection of individual stories offers an insight into the unique heritage of this memorial and its living legacy.