Skip to content
Home > Books > Fiction > On the Niemen 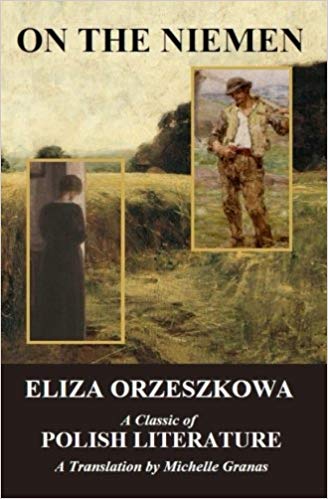 Unhappy after being abandoned by her fiancé, Justyna, an impoverished young woman who lives in a manor house belonging to relatives, desires a life of greater usefulness. While being pursued by a wealthy aristocrat and by her former love – now married – she meets Jan, a man of lower social standing, who introduces her to a different world: one of closeness to nature, manual labor, and communal enjoyments. To leave the manor for a farmstead would be a very peculiar proceeding, however, and furthermore, the farming community is feuding with Justyna’s uncle.

Set in the 1880s among the Polish population in a part of what was once the Polish-Lithuanian Commonwealth, the story involves the consequences of the January Uprising, twenty years before, against Russian rule. The characters are drawn from a cross section of society and the novel’s topics include love, social justice, egotism and materialism, the psychological effects of war, the emancipation of women, marriage as partnership, drug addiction, dignity, obligations to one’s fellow humans, what it means to be civilized – and joy.

Eliza Orzeszkowa (1841–1910) was born to a noble Pawłowski family in Milkowszczyzna, and died in nearby Grodno (now in Belarus). Aged sixteen, she married Piotr Orzeszko, a Polish nobleman twice her age, who was exiled to Siberia after the January Uprising of 1863. They were legally separated in 1869. She married again in 1894, after a 30-year-long relationship with Stanisław Nahorski.

Orzeszkowa wrote a series of novels, dramas and novellas, dealing with the social conditions of partitioned and occupied Poland.

Magda read this book at school; she remembers its ‘romance and pharmaceuticals’. Some today had found it boring. Is it a good translation, especially of the villagers’ speech? It feels too literal at times, creating unidiomatic English.

The book describes life on an impoverished estate. It presents many parallels. There is the contrast between the river, visible from many points, and the graves hidden in the woods / the gorge; and between the grave of Jan & Cecylia (romantic, fondly remembered) and the mass grave (tragic, bitterly remembered). Characters are compared and contrasted too, e.g. Justyna & Marta, Emilia & Mrs Andrzej, Mrs Andrzej & Mrs Kirlo, Witold & Zygmunt.

Mrs Andrzej can’t mix with the common people, unlike her husband, or Mrs Kirlo; she teaches the village children, albeit only one at a time; she spoils her son, and discourages Justyna from marrying him; she has something of the Calvinist about her, doing her duty but taking no pleasure in it, a poor communicator (in this, like Theresa May); her priority is keeping the land, as her husband’s memorial.

Due to the then censorship Orzeszkowa was unable to refer directly to the 1863 insurrection, though it permeates the book. Its failure affects the living too, e.g. the consequences of Marta’s rejection of Anzelm.

Other gentry (szlachta) dismiss the peasantry completely, and see no point in educating them. The classes are frozen away from each other, as was the case in Britain at the time, where in Church of Scotland kirks the gentry sat at the same level as the pulpit, while the people sat below both. Hardy might be the English literary equivalent. In Poland at moments of crisis – 1812, 1830, 1863 – landowners and peasants find shared interests and act together, in what Benedykt calls ‘the returning wave’.

The landowners are demoralised, but still have a greater ability to make choices than the peasants. Women have some power and independence, e.g. Elzunia will dominate her future husband. A single mention of Jews (a tailor in a nearby town), and little organised religion – ‘the Apostle’ in his dark glasses, and the repeatedly remade cross at Jan & Cecylia’s grave. Their journey to it, and to the mass grave, has the nature of a pilgrimage.

The book is too long, becomes like a soap opera at times. It contains lengthy descriptions of nature, with many plant names – someone reckoned 500 are mentioned. It improves towards the end, especially in the long wedding scene. It has the potential to become melodramatic, but Orzeszkowa desists, as when she has Jan defuse the potential fight, and Mrs Giecold’s cigarette doesn’t set the barn, full of dry grain, alight.

Benedykt has the same relationship to the land as the peasants, but has a poor relationship with them. Witold and Leonia will turn into their parents. Justyna takes the initiative by giving her ring to Jan; Zygmunt’s disbelief that she will turn down (not just him but also) Rozyc. Compared to Marta she makes an active choice. The book ends with the grave mound, but that tragedy won’t be repeated – a new generation makes different choices.

Grazyna’s copy was published in Glasgow between 1943 and 1945, copied (photographed) from a first edition in the British Library.