Skip to content
Home > Books > Fiction > The King of Warsaw 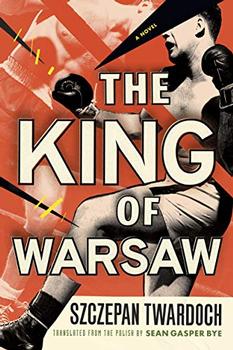 It’s 1937. Poland is about to catch fire. In the boxing ring, Jakub Szapiro commands respect, revered as a hero by the Jewish community. Outside, he instills fear as he muscles through Warsaw as enforcer for a powerful crime lord. Murder and intimidation have their rewards. He revels in luxury, spends lavishly, and indulges in all the pleasures that barbarity offers. For a man battling to be king of the underworld, life is good. Especially when it’s a frightening time to be alive.

“This is a real ‘boy’s’ novel. It begins with a punch—with a fast-paced description of a boxing match. All of Twardoch’s fetishes are in place: weapons, cars, suits. There’s exciting violence, a locker-room atmosphere, sexual fantasies, and voyeurism — we first see the main protagonist, the Jewish mafioso boxer Jakub Szapiro, through the eyes of an anxious skinny boy… A retro detective story in the spirit of Tyrmand, but darker and more brutal.” Witold Mrozek

“A brilliant and inventive novel about the Polish-Jewish underworld of the interwar period… highly suspenseful.” Frankfurter Allgemeine Zeitung

“Something like a Polish version of Inglourious Basterds, in which the oppressed Polish Jews, supported by a likable Polish gangster, take revenge on Polish anti-Semites. Or simply a gangster picaresque novel set in an era that is increasingly popular.” Juliusz Kurkiewicz

The book was heavily promoted in Poland, with pre-war-style adverts tapping into a vein of nostalgia, and with eyes on a film or tv adaptation. It was reviewed well by critics from both the left and right of the political spectrum, though it did have some bad notices from literary critics.

According to Twardoch, the book grew out of Morfina, when he came across a historical figure whose story he wanted to tell, who became Buddy Kaplica,. Twardoch believes fiction can explain things better than reportage. He ordered copies of Polish periodicals of the time, and drew on these linguistically, so the text contains certain words unfamiliar to Polish speakers today. He also took up boxing as part of his research, and has stayed with it since; everything is embodied, there is no mind / body duality.

Twardoch insists on geographical accuracy, and is precise about the location of scenes and journeys; the book is a litany of street names, perhaps as a way of placing this other world in the present. The people, and the original buildings, may be gone, but we can still stand, or imagine ourselves standing, where they did.

The genre might be described as ‘retro-noir’. The characters are wooden, cartoon-like stereotypes – sensitive gangster, whore with a heart of gold – reflecting the reductive barrenness of violence.

It’s a world familiar from films and novels set in New York or Chicago of the thirties – small shopkeepers caught between the law and the mafia – though here there is the added element of paramilitary political groups linked to crime, so more like the Northern Ireland of the Troubles.

The book’s epigraph is taken from Moby Dick, and Litani, the sperm whale, mainly seen by Mojsesz, but by others too, is a Leviathan of doom hanging over the fate everyone in the city, uncontrolled and uncontrollable. Simone Weil’s essay, ‘The Iliad, a poem of force’, was mentioned in this context, another work about how violence engulfs everything.

It is a book about power, hence the title. Jakub is the king of Warsaw, that’s his patch, his territory, and that only; he can’t imagine living anywhere else, hence his turning back from Palestine. He and Kaplica only understand people with power; Kaplica is only redeemed when he loses it. Jakub is something of a Robin Hood figure, ruthless but capable of generosity. The story tells of his preparation for power, but not about the exercise of it during his ‘reign’, which takes place after the book ends, and very little about the Ghetto, only the bare facts.

Jakub could live with all the murders he committed except that of (whose father, Naum Bernstajn, he also killed); this is the only one he has on his conscience. Why? Perhaps because it was accidental. Mojsesz Bernstajn / Moshe Inbar is a projection of what Jakub might have become, had he left Poland as planned. Jakub is unable to save his sons – perhaps his notion of saving Mojsesz / Moshe is a way of dealing with that – and a way of dealing with his own moral failures, imagining what might have happened had he emigrated. How convincing is the switch of narrator three-quarters of the way through the book. Do we lose faith in everything else we have been told? How much else might have been made up?

There are good descriptions of tangible, sensory, physical experiences – food, clothes, boxing, lovingly detailed descriptions. Its themes of loyalty and love (a questionable commodity) include love between men. In the connections between gangsters and police, factions and alliances, violence spreading into previously non-violent areas of life, it’s reminiscent of Peaky Blinders.

Female characters are subservient, with the exceptions of Anna and Madame de Potocki, though neither are in control of their own destiny. Emilia and Magda are presented as secular, liberated Jews, who take part in physical exercise outside the home, but are still tied to their men. Emilia won’t go to Palestine alone, despite her foreboding. Ryfka is a survivor, but unable to have children.

There’s little Catholicism evident, with Pantaleon the only character who is practising. With his ‘devil bother’, he is both vulnerable and dangerous; his two faces leading the narrator to ask, what is a man? In the elision of Moshe and Jakob, there is a lack of individuation.

A perhaps not entirely successful novel – a genre novel with literary elements – one that repaid a second reading.