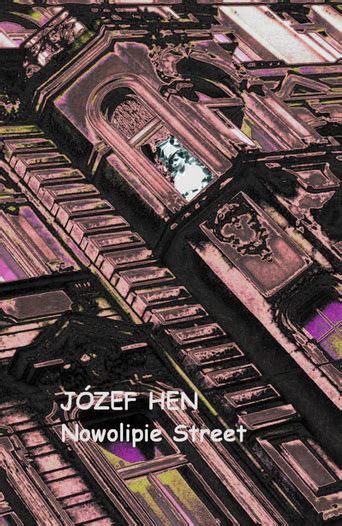 Hen’s memoir is about growing up in a middle-class Jewish family in Warsaw during the 1920s and 30s, until the first few months of the German occupation. Nowolipie Street, where Hen lived as a child and young adult, is both the happy background and the source material for his narration. As remembered and retold by Hen with loving detail, the world of his youth regains its full shape and vivid color. This world is shattered when Germany invades Poland. The author and his family live through the horror of the incessant bombardment of Warsaw and the chaos of the next few months. Slowly but inexorably, the noose begins to tighten around the Jewish population. Eventually, the sixteen year old author makes the agonizing decision to leave his parents and flee his country.

Hen wrote the book for his grandchildren, and is packed with real-life characters. The poignancy of describing a character, then saying what happened to them in the war (including saying he doesn’t know, which in many cases means they did not survive).

The book is written in straightforward language, easy to read.

When writing this, did he refer to notes he made as a child, or was it written from memory? Perhaps from notes made in conversation with his mother – the only member of his family to survive – after the war.

The family dynamics – his father preferred his older brother Hipek, while he was more of a mummy’s boy.

Little overt anti-Semitism described – the main incident when Boczek, a boy who is his friend, attacks someone in the street for being Jewish; Hen ends their friendship at that point.

His devotion to and enthusiasm for writing, even as a child; the beneficial influence of Dr Korczak.

His reflections on British and American films, and realising that the Poles are more Indians than cowboys, more natives than British soldiers.

The chapter on their maids, titles ‘For Everything’ – the Polish term for ‘Jack-of-all-trades’ is ‘maid-of-all-work’ – many less well-off households had a single maid who was expected to do whatever needed doing (in larger households maids would be more specialised).

Within the Jewish community there were different levels of religious faith; as the book goes on his family, and the other families in their building, become less observant.

He goes to a Jewish school, though at the time Jewish children had the option of attending Polish schools – probably more intermingling in the country.

He and his friends laugh at the funny accents of the teachers from Lwów.

A dream prompts him to leave Warsaw for the Soviet Union in autumn 1939. Luckily for him, it was the right decision.

Crossing to the Soviet Union, he hides his Jewishness by dying his hair blond and pretending he understands no German at all (as a Yiddish speaker he would recognise many German terms).

Stalin forbad Poles in the USSR to stay within 200km of the border; his sister is sent to Asia.

Where Hen lived, there is now a large shopping centre, Arkadia.

Railway lines ran through the area – used to deport Jews, ordered to gather at Umschlagsplatz.

Jews buried papers, hid them in milk churns etc, and many were recovered after the war.

Within Poland, divides are based on the former partition, areas formerly under German / Russian / Austrian control. (After the war the Communist government didn’t develop former German areas, worried that the Germans would soon come back and reclaim whatever was there.

One takeaway from the book, as relevant now as then – we cannot predict the future.

Hen published a sequel, The Most Beautiful Years, continuing his story from late 1939.