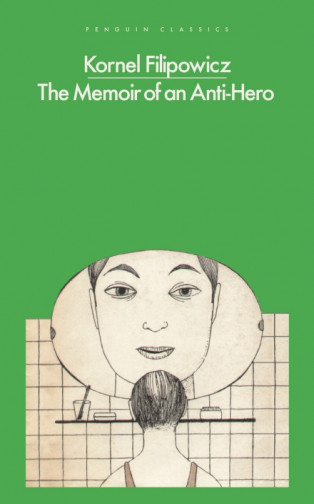 The Second World War. Poland. Our narrator has no intention of being a hero. He plans to survive this war, whatever it takes.

Meticulously he recounts his experiences: the slow unravelling of national events as well as uncomfortable personal encounters on the street, in the cafe, at the office, in his love affairs. He is intimate but reserved; conversational but careful; reflective but determined. As he becomes increasingly and chillingly alienated from other people, the reader is drawn into complicit acquiescence. We are forced to consider what it means to be heroic and how we ourselves would behave in the same circumstances.

Some review of the book:
The Times
Shiny New Books
1st Reading

The book – critical of the pre-1939 Polish government – looks behind the myths of occupation, when many ordinary people didn’t resist or support uprisings. Normal life carried on, more or less. In Jan Gross’s Polish Society Under German Occupation, partisans described dealing with the occupation similarly to dealing with a natural disaster – violent, unpredictable, random; they muddled through while minimising risk.

The narrator reflects on his situation, but doesn’t have strong convictions beyond a desire for self-preservation; he despises the losers, first the Polish army retreating before the Germans; then the Germans retreating before the Soviets.
He tries to shield himself from fear and uncertainty. He has some agency; he takes the initiative in the affair with the caretaker, and speaks German well enough to land an office job. Was he in fact a Volksdeutscher (ethnic German)? Unlikely, as he would have been conscripted to the Wehrmacht, and the area he came from wasn’t home to a Volksdeutsch population. Could he be considered a collaborator?
He seems to be faced with no difficult moral decisions in his work (he never specifies what he does). He changed course according to circumstance, and blurred boundaries to suit his situation. A contrarian, but skilled in reading situations and extracting himself from them. ‘sprytny’ (smart, clever)
His lack of concern for others however gives him a bad conscience. He has Jewish acquaintances, but his reaction on hearing their fate is to be pleased he doesn’t have to make further payments on his bike. The old lady on the balcony, to whom he never speaks, is a reassuring presence, an anchor during a time of upheaval.
His physicality; bathing, trying to cleanse himself; looking at himself in the mirror. Self-centered, without family or relatives, separated from the outside world in his flat. Detachment and seclusion.
Skillful, and lucky, as the way he disposed of the rifle in 1939 is interpreted at his trial to exonerate him. Does the trial turn him into a hero? When at his trial he hears Zofia’s testimony (which is untrue) he starts to believe that he was a good guy, and that her testimony was in fact the truth. He’s not that important, so the state has no particular need to find him guilty.
At the end he regrets behaving as he did, but only briefly.

A convincing narrative voice. A carefully plotted book, full of irony. The whole narrative is presented in inverted commas, as if it is being spoken to someone (as is Catcher in the Rye).

A comment on the Polish obsession with heroism and martyrology. The book as a defence of humanity – not putting someone on a pedestal, but showing someone imperfect and saying, we are all like this, a little. And heroes have flaws too, though these are often overlooked. What makes a hero – or an anti-hero – often has little to do with them as individuals. People often survive thanks to luck, chance, manipulation, self-interest, a lack of concern for others.
He is somewhat like the Good Soldier Švejk, with his survival instinct, but this work is less comic. Reminiscent of the character in Wittlin’s Salt of the Earth. Rozewicz’s critique of Poland as a ‘Nation of Heroes’, cf his play The Card Index; Poles seen as having primitive minds feeding on illusions. No survivor could be a hero, as the heroes were all dead.
While some writers like DH Lawrence deal with Life, others like Jane Austen – and Filipowicz – deal with life, in all its particularities.

Filipowicz was a prisoner during the war; published his first book in 1943 (an edition of ten); before that, did odd jobs (clerk, trench digger). He signed the 1968 letter, and was a strong figure in the Solidarity period. He is known for knowing Szymborska: a volume of their letters has been published, and she edited a collection of his stories. He was friends with Rozewicz and Kantor, and supported / mentored young writers.

A stage version of The Memoir… has been presented in Warsaw, and a film was made in 1993. Filipowicz’s son has organised meetings / seminars on his father’s work; and in his home town of Cieszyn there is a bookshop / café called Kornel which has copies of all his books.

The translation by Anna Zaranko reads well. She speaks about Filipowicz in this interview from 2019, and you can read her translation of one of his short stories here.

2 comments on “The Memoir of an Anti-Hero”