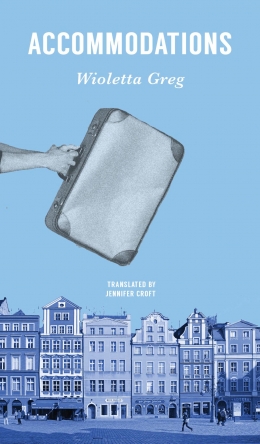 By: Wioletta Greg (Grzegorzewska)
Translated by: Jennifer Croft
Published by: Transit Books
Originally published by: W. A. B

Accommodations (originally published as Stancje in 2017) is the second novel by the poet and writer Wioletta Grzegorzewska, who is better known to English readers by her pen name of Wioletta Greg. Accommodations can be considered a kind of sequel to Greg’s Swallowing Mercury (Guguły, 2014), the story of a childhood spent in the Polish countryside in the late 1980s. [link]

Accommodations picks up this story and takes it further, as the protagonist leaves her rural community for the city of Częstochowa. As Jennifer Croft, this novel’s translator, notes:

Accommodations is a beautiful and frenetic coming-of-age tale by a brilliant poet whose unparalleled linguistic resources enrich and enliven the page. This book is about finding one’s place in the world – accommodating and being accommodated by new people and places and things.

Some found it fascinating but confusing. Dream, hallucination, reality distorted by illness / poisoning. Things make more sense on a second reading. Other thought it was realistic, and the chronology was straightforward.
It’s the work of a poet, more so than Guguly / Swallowing Mercury, prose poetry.
Hard to translate – her use of slang, local vocabulary. ‘Stancje’ means private accommodation. The English words ‘accommodations’ suggests, as well as a place to stay, acceptance and drift, which tallies with the narrator’s character, so does more work than the Polish title. Some of the monologues are impossible to translate, e.g. W’s grandfather (p.184). The use too of prison slang.
A growing-up narrative.
Her life in the hostel, a semi-criminal demimonde, then she is swept up off the streets by a nun, like a deus ex machina. These are ‘civil nuns’, who don’t wear habits, and do ‘rescue’ girls from the streets. The convent is a safe environment for the narrator, but the war still casts a heavy shadow, cf the story of the Germans shooting the men in the street; the Mother Superior’s attitudes to the German pilgrims, and her confusion of present and past, Wiola and Anula. The Mother Superior’s need to recall the past. Why does she give Wiola (and her predecessors) herbs that make her ill?
Atmospheric, describing this period of transition in the mid-1990s. Contemporary references, e.g. the siege of Grozny, Macdonald’s.
Her attitude to religion – the narrator and the author both describe themselves as non-believers, but the narrator doesn’t take a critical attitude to religion.
WG has said Czestochowa is her favourite city, where she studied, fell in love, gave birth to her first child. A holy city, with the cult of the Black Madonna, besieged in the past by Swedish and Russian armies. Its current population is 222,000 (wikipedia).
In an interview WG described herself as first a mother, then a writer, then an immigrant (to the UK).
She needed to leave Poland to have a perspective on it. Accommodations is somewhat like Joyce’s Ulysses, with the same fascination for the particularity of a time and place. WG interviewed people to make sure she got details right.
A rush at the end, as things come together.
There are moments of apparent slapstick, e.g. when Kamil kisses her and leans against the entry buzzers, or when she is sliding along the convent floors and bumps into the Mother Superior, but they’re not actually funny.
Synthesis, p.129. Protection, the ability to lead an intellectual life.
As in Conrad, a gallery of characters, and their extraordinary stories.
It’s a short book, but filled with references to so much – drink, violence, games, sex, agrarian memories, botany, astronomy, ethnography, the Warsaw-Vienna railway line…
W’s identity during this period of maturing is affirmed through her relationship with Kamil. Her different roles inside and outside the convent – inside she must wear the wooden clogs, outside she wears make-up, and dresses differently.
Life outwith the university forms her.
As a child she is beaten regularly, and brought up by her mother to be a domestic servant. Her grandmother becomes a beautiful witch, finding her independence when her grandfather (the only one who doesn’t beat her) dies.
The Jewish population was wiped out during the war. There is no mention of Jews in the book, other than one passage which says after the flood people were divided into Semites and Anti-Semites.